We place our trust in the hands of medical professionals to treat injury and disease with the appropriate diagnosis, medication and dosage.

If you receive the incorrect medication or dosage this can impact on your health and exacerbate the illness that it was supposed to treat.

On Wednesday 26th January, the Health Service Executive published a report into the care of over 1,300 children who attended the South Kerry Child and Adolescent Mental Health Services (CAMHS).

Taoiseach Micheál Martin has described a review into mental health services in south Kerry as shocking, very serious and unacceptable.

The report was originally commissioned by the Health Service Executive (HSE) following concerns raised about the treatment of a number of children and adolescents attending the facilities. The report was prepared by a team led by Dr Sean Maskey, Consultant Child & Adolescent Psychiatrist.

The report found that no extreme or catastrophic harm had occurred in the 1,332 considered. However, there were 227 children where the diagnosis and/or treatment exposed them to the risk of significant harm by way of one or more of the following: sedation, emotional and cognitive blunting, growth disturbance and serious weight changes, metabolic and endocrine disturbance, and psychological distress.

The report also found that 13 other children were found to have been unnecessarily exposed to a risk of harm under the care of other doctors in the service. 46 children were found to have suffered significant harm to include galactorrhoea, considerable weight gain, sedation during the day, and elevated blood pressure. The report went on to specify that the figure of 46 will change once new information becomes available following meetings with the families affected.

The report suggests that the diagnoses of ADHD, particularly for secondary-school children, was frequently made without adequate evaluation and/or without the required level of information in relation to their presentation in school from their teachers. Feedback from teachers was not requested as part of the management of treatment response for ADHD.

There was evidence of inconsistent and inadequate monitoring of adverse effects of medications on children and this included:

Dr Maskey and his team made a total of 35 recommendations which cover areas such as re-establishing trust in the CAMHS service, governance, delivery of clinical services, improved clinical practice and the use of information and communication technology.

The government have announced that there will be an audit conducted into the compliance of each of the CAMHS teams nationally.

Following the publication of the report, the Health Service has issued an apology to the families involved.

The government have announced that a review of all CAMHS facilities will be carried out across the county following the report on the south Kerry Child and Adolescent Mental Health Service published last week.

The Mental Health Commission confirmed that the Inspector of mental health services Dr. Susan Finnerty will conduct the review.

The report which prompted the review found that 227 children whose cases were managed by a junior doctor, were exposed to a serious risk of harm by way of sedation, emotional and cognitive blunting, growth disturbance and serious weight changes. The report also found “clear evidence” of significant harm being caused to 46 children.

Minister for Mental Health, Mary Butler has committed to a “non-adversarial scheme” for compensation for the families affected by the report. Mary Butler went on to say that the details of the scheme will be confirmed without delay.

In the meantime, journalists continue to speak to parents and children who detail what they consider the failings of the CAMHS service in areas like Wexford and Dublin.

A claim for incorrect medication or over-medication generally involves;

Establishing that medical care was negligent Before anyone can make a claim for medical negligence, they must first obtain a report from an appropriate qualified medical expert to confirm that the medical care you received fell below acceptable standards. For a valid claim, it will need to be shown that two conditions have been met:

A breach of duty of care – It must be shown that the clinical staff providing treatment owed the patient a duty of care and that they breached that duty of care by making mistakes that no other health professional would have made under the same circumstances.

Calculating compensation How much compensation is available for a specific instance of medical negligence will be determined by the impact on the patient of the harm caused. This can include:

Interim payments for medical negligence Often there is the need for immediate financial support to cover costs such as fees for medical treatment, rehabilitation care and other essential support. Where this is the case, it may be possible to secure interim payments while a claim is ongoing, allowing the claimant to access the support they need sooner.

Fatal medical negligence claims Where someone has died due to medical negligence, an appointed personal representative of the deceased  may be able to make a claim under the terms of the Civil Liability Act, 1961, Part 4. They will have two years from the the date of death to do so. In the event that a personal representative is not appointed within six months of the date of death, anyone who was a dependant of the deceased at the time of their death can potentially pursue a claim within the time limit. Compensation for a fatal medical negligence can include damages for:

Patients normally have two years to claim compensation for medical negligence in most circumstances. However, there are some situations where patients may have more time to claim. The date of knowledge for medical negligence claims A key point is that the two-year time limit will be counted from the ‘date of knowledge’ i.e. the date when the claimant was first aware of the following key points:

The date of knowledge could potentially be weeks, months or even years after the injuries occur, so this can have a significant impact on how long a person has to claim.

Time limits for medical negligence compensation for children Where the claimant was under 18 at the time the negligence occurred, the standard two-year time limit will be counted from their 18th birthday. They and/or their parents or guardians will therefore have until the claimant turns 20 to make a claim.

The exact fees for pursuing a medical negligence compensation claim will depend on the circumstances. Factors that may affect these costs include whether the claim can be resolved with an out-of-court settlement or whether court proceedings are required. Our team will discuss costs and funding options during clients’ initial consultation. *In contentious business, a solicitor may not calculate fees or other charges as a percentage or proportion of any award or settlement. This statement is made in compliance with RE.8 of S.I. No. 229 of 2019.

For further information on making a claim following an injury due to medical misdiagnosis in Ireland, please contact Lavelle Partners in confidence on (01) 644 5800 or email Avril Scally at [email protected]

Please get in touch with one of our specialists 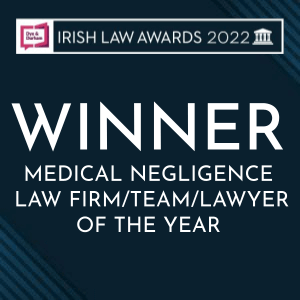 Our aim is to keep you up to date with regard with important news and events from a legal perspective, written by our team of award winning solicitors.

Partner Marc Fitzgibbon spoke to The Sunday Times last week about Twitter's initial approach to layoffs in Ireland, and their contravention of our national legislation on redundancy.

Lavelle Partners LLP are open for business in Galway.

We're delighted to launch our Eyre Square office, offering the same range of business and private client services as our Dublin office.

Some cookies are essential, whilst others help us improve your experience by providing insights into how the site is being used. The technology to maintain this privacy management relies on cookie identifiers. Removing or resetting your browser cookies will reset these preferences.